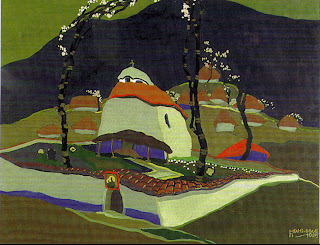 My father would have been initially horrified (if not altogether surprised) that this morning – Good Friday – found me reading papers about, first, Impact Assessment (IA) and, then, Project Management (PM)!! But in many ways, it is appropriate. After all, these are some of the central elements of the new secular religion which we have learned to worship in the last 4-5 decades (I’m not joking). But, in redemption, let me pray that –
• I was last night cursing Google for the way it feeds the frenzy of the contemporary and dishonours the nobility and wisdom of so many of our immediate predecesors (I could trace no reference to my father or any of the great teachers I had – save one memorable English teacher (Mabel Irving) who died recently and was very nicely remembered.
• I have been tuned (as usual) to BBC 3 Classic Music – in particular Through the Night whose choice today has very much respected the date and theme of death and resurrection.
• The readings of IA and PM have been critical (as distinct from adulatory) ones.

Let me explain. I first began to hear of this powerful medicine called Impact Assessment about ten years ago and, frankly, found it very difficult to understand (which is entirely appropriate for a wonder ointment). My background is political science and policy analysis (I had one of the first postGraduate Degree courses in the latter subject in the early 1980s). At one level, therefore, IA seemed to me to be common sense – enjoining us to think about the various ways which proposed legislation would impact on social groups and the costs (if not counterproductive consequences) it would bring. But, of course, it came from a specific political agenda – which was hostile to government intervention. And it did require us all to pay particular attention to the costs which Regulations would have on business – particularly the Small and Medium Sized Enterprises (SMEs) which have been the West’s holy grail of the past few decades. Fine – and so were the „ex-ante impact assessments” which also became all the rage a decade or so ago in the European Commission. I met a Bulgarian Professor recently who was apparently a specialist in this (as she had been of Stalinist planning a couple of decades ago). Fine. I decided therefore to read the 2006 book which I had found recently on the internet about the subject - Andrea Renda’s Impact assessment in the EU - the state of the art and the art of the state. I found this a bit, well…Stalinist …but her more recent slides for the OECD seemed a bit more critical and provocative ; and also here . And this academic paper threw even more light on the matter.

I alighted today on project management because of a last bit of cleaning up to the Varna paper – and had an incomplete reference to a paper by Roger Lovell on civil service reform which used the dimensions of “agreement to change” and “trust” to distinguish the very different roles in the change process of allies, adversaries, bedfellows, opponents and fence sitters.
Project Management is what I did not have enough of in the 1970s and 1980s - and have had a surfeit of since! I was then led to some good papers here, here and here.

Der Spiegel has a disturbing picture of what Europe means for some Bulgarians and this article remiinds us of how life is lived elsewhere.
Glory indeed to God!
The painting (Maglitz Monastery) is by one of the most famous Bulgarian "Secessionists"(as the Nouveau Art is called here) - Milev. Maglitz has great wine!!
Posted by nomadron at 2:26 PM

Email ThisBlogThis!Share to TwitterShare to FacebookShare to Pinterest
Labels: policy-making