Artists' Haven on the Danube 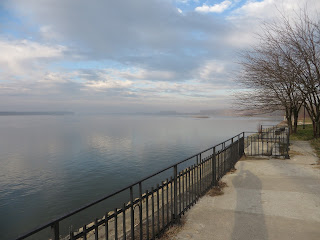 I spurned the easy option of a fast exit from Sofia via the Balkan Highway which has me at the top of the mountain range within half an hour of leaving the flat and chose the direct route due north, over what I remembered as a hill. But memory was deficient and it proved to be a tortuous mountain route - but the sight of ice-tipped branches and remote villages more than compensated 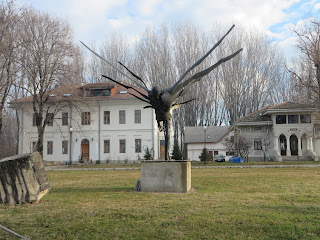 There was a smattering of snow on the ground at the final metres…as I headed for Montana, realising that my road may have been 40-50 kms shorter than the main highway from Sofia but is about an hour longer! Berkovitsa offered a gallery which was closed for lunch but I did see some marvellous wood carving artefacts (eg the pulpit) in its 11th century (?) church….Memorials to the 1923 communist uprising are still to be seen in this isolated area which I had visited in 2012 on my way to workshops for municipal officials in Vratsa and Belogradchik (site of two great wines)….

The new bridge over the Danube at Vidin is only the second such link between the 2 countries (the first was built in 1956) and the container traffic already making a nuisance of itself. Noone, it seems, thought to anticipate its effects – although a pathetically small stretch of bypass is being built around Montana….

I had forgotten how fascinating the Belogradchik crags and Serbian (?) mountain ranges are in the far distance and had to be careful both photographing on the straight stretches and negotiating the tight bends – a lorry had already come to grief and was causing a tailback…..There are no signs for the bridge as you reach Vidin – only for Belgrade and “Calafat” (a village on the Romanian side) but just follow the container traffic and you are soon on the new approach (clearly not much used by local traffic) and then on the white snake that is the long bridge….. 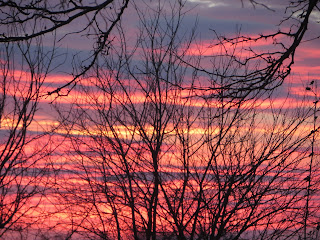 The Russe-Giurgiu entry to Romania is the one I know from the countless Danube crossings I have made these past eight years – and a soul-destroying entry it is with its garbage and dogs….Exiting from the Vidin bridge, by contrast, is a delight – with the villages being tidy and compact and a charming self-build idiosyncratic house style from of 1930s and before. Nowadays the only traffic are the barges which play up and down – and the odd cruise ship (eg this one which starts at Bucharest and ends at Budapest with some fascinating destinations organised en route)
Port Cetate (Port Fort) was a customs point in earlier centuries when River traffic helped connect towns such as Russe, Svishtov and Vidin to their Romanian and other neighbours further upstream
The photograph shows the core of the complex as it has been restored in the last decade as a Writer’s House by poet and TV star Mircea Dinescu.
A warm welcome was much appreciated after what had been a 6 hour drive (but less than 250 kms) from Sofia – all the warmer with a glass of the estate-made rakiya (which it’s actually called in Oltanea). A gloriously clear liquid, it was one of the best rakias I’ve ever tasted – and I am now a bit of an expert!!
That was the start to a glorious bean soup produced by the kitchen staff (who seem well-used to people dropping in at odd hours) great home-produced bread, sausages and pickles…all with one of the white estate wines (a Pinot Gris) and good conversation. The sun was setting as we ate and talked and was nicely captured on film.

An hour or so in my room gave me the time to think more about what seem to be 2 projects – a modest “micro” one running with the first idea of bringing some of my Bulgarian artist friends together with some Romanian painters; the second the more ambitious one I hinted at in the previous post…. 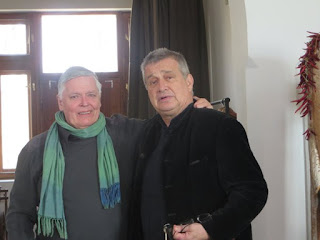 A second bottle of estate wine graced our next conversation in which we were joined amazingly by Mircea Dinescu himself who emerged out of the darkness and plumped down beside me. After some initial reserve, he was soon in great form (thanks to Sergiu’s skilful translation) but perhaps helped by realising how well I knew some of the figures of Romania’s recent past such as Josef Sava and Marin Sorescu….

The next morning I had the time to look at the material I had collected on Bulgarian strategies and projects in this part of the world; summarise them and distribute it to various friends for comment. Apparently the deadline for the next wave of bids for this Interreg programme is March which gives time for the collection of the necessary support from beneficiaries…..I duly left Port Cetate at midday heading through Craiova for Bucharest – a journey of more than four hours……
Posted by nomadron at 6:25 PM