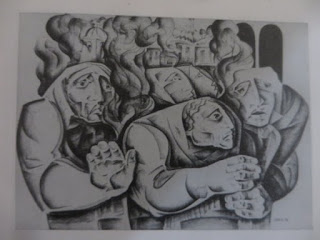 You may have noticed that the last few posts have mentioned the importance of trying to see the world from a variety of perspectives. I stumbled on the importance of such a vision through the accident of my birth – caught in the middle of the tensions (class, religious and political) between the West and East ends of a shipbuilding town in the West of Scotland.
In my 30s, as a senior local politician, I felt the pull between loyalties to local constituents; to party colleagues; to official advisers; and to my own conscience – and indeed developed a diagram for students to show the 4 very different pressures (audiences) to which politicians are subjected –
- local voters (if the electoral system is based on local constituencies);
- the party;
- the officials (and laws) of the particular government agency they had entered;
- their conscience.

Politicians, I argued, differ according to the extent of the notice they took of each of the pressures coming from each of these sources – and the loyalties this tended to generate. And I gave names to the 4 types which could be distinguished – eg populist; ideologue; statesman; maverick.
- The "populist" (or Tribune of the people) simply purports to gives the people what (s)he thinks they want - regardless of logic, coherence or consequences.
- The "ideologue" (or party spokesman) simply reflects what the party activist (or bosses) say - regardless of logic etc.
- The "statesman" (or manager) does what the professional experts in the appropriate bit of the bureaucracy tell him/her - regardless of its partiality etc
- the "maverick" (or conviction politician) does what they think right (in the quiet of their conscience or mind - no matter how perverted)

I tried to suggest that the effective politician was the one who resisted the temptation to be drawn exclusively into any one of these roles. Each has its element of truth - but it is when someone blends the various partialities into a workable and acceptable proposition that we see real leadership,

And, as a nomadic consultant, I have noticed how academic and national boundaries make mutual understanding difficult – but that those who persist in working in the "no man's land" on these boundaries get superb opportunities for new insights……A bridge-builder is a metaphor I like - although there is a famous central European saying that "the problem with bridges is that, in peace time horses shit on them and, in war, they are blown up"

All this came back to me as I read a paper by Peter Mair (from 1995) which, looking at the relationship of the political party to both society and the state, nicely tracks the historical trajectory of the politician.

First “grandees” (above it all); then later “delegates” (of particular social interests), then later again, in the heyday of the catch-all party, “entrepreneurs”, parties, the authors argued, have now become “semi-state agencies”. The article has some simple but useful diagrams showing how the three entities of political party, society and state have altered their interactions and roles in the last century.
We are told that proportional representation gives citizens a much stronger chance of their preferences being expressed in the final makeup of a Parliament. But that fails to deal with the reality of the party boss. Politicians elected for geographical constituencies (as distinct from party lists) have (some at least) voters breathing down their necks all year round.
Not so those from the party lists who only have to bother about the party bosses who, in the past few decades, have got their snouts increasingly stuck in the state (and corporate) coffers.

Looking at the three models as a dynamic rather than as three isolated snapshots, suggests the possibility that the movement of parties from civil society towards the state could continue to such an extent that parties become part of the state apparatus itself. It is our contention that this is precisely the direction in which the political parties in modern democracies have been heading over the past three decades.

(We have seen a massive) decline in the levels of participation and involvement in party activity, with citizens preferring to invest their efforts elsewhere, particularly in groups where they can play a more active role and where they are more likely to be in full agreement with a narrower range of concerns, and where they feel they can make a difference. The more immediate local arena thus becomes more attractive than the remote and inertial national arena, while open, single-issue groups become more appealing than traditional, hierarchic party organizations.

Parties have therefore been obliged to look elsewhere for their resources, and in this case their role as governors and law-makers made it easy for them to turn to the state. Principal among the strategies they could pursue was the provision and regulation of state subventions to political parties, which, while varying from country to country, now often constitute one of the major financial and material resources with which the parties can conduct their activities both in parliament and in the wider society.

The growth in state subvention over the past two decades, and the promise of further growth in the coming years, has come to represent one of the most significant changes to the environment within which parties act

the drawing is by Bulgarian Alexiev (Zdravko) - a tribute to the martyrs of the 1876 uprising
Posted by nomadron at 1:56 PM