The Search for Democracy 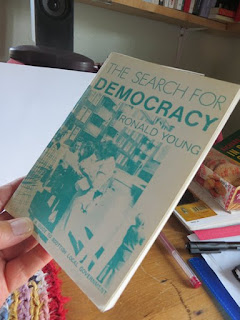 In 1977 I published a little book called “The Search for Democracy – a guide to and polemic about Scottish local government” which was written around some 40 questions community activists and students were putting to me about the new system of Scottish local government which had arrived in 1975. I was in a fairly unique position to deal with this since I had, for some 3 years, been occupying one of the leading positions in the country’s largest local authority – Strathclyde Region


Not least of my puzzlements was about the source and nature of power. And the story told by one of the architects of the British NHS (Aneurin Bevan) about his own search for power - from his own municipality through trade unions to the heights of the British Cabinet - used the powerful metaphor of the onion. As each layer peeled away, there did not appear to be a heart!

Like Bevan, I have been peeling away various slices to try to get to "the heart of the onion" eg (in Scotland) as community activist; manager of community development projects; political science academic; local councillor; local manager; - then since 1990 foreign consultant (capacity development; civil service reform); change management expert; trainer.......

The subtitle to part I of the book was “Birthpangs or Death Throes?” The questions the book explored related naturally to those organisations which most immediately impacted then on ordinary people
As, in later years, I dealt with higher levels of government, the questions changed.....And, as local government has become emasculated, so the questions which people raise have perhaps become more pertinent....

Forty years on I am still, it seems, “searching for democracy”….. but, as the various papers in this website show, the questions have become global.

Indeed at the start of the new millennium I had been so concerned about its erosion that I had drafted a paper around a set of rather different questions an updated version of which - Guide for the Perplexed – I placed on a website some years ago……
There it has languished, still unfinished…….but a recent exchange has encouraged me to pull it out again and do a bit of minor updating…..

it’s now called Mapping the common ground and is a fairly rare overview of what has been written over the years about the democratic malaise from which we have been suffering for the past 2 decades…
Please dip in - and let me know what you think!!
Posted by nomadron at 12:33 PM