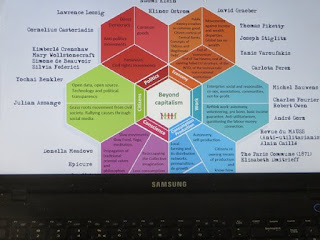 How might one read most beneficially a book which, from my google links, looks to be one of the most appreciated and reviewed of the past decade?
Paul Mason’s Post Capitalism -   a  Guide to our Future came to my notice a year ago but it was only yesterday that I actually picked it off the shelves and started to read it.
I was unable to apply my litmus test to it since it lacks a bibliography – but I knew enough about it to have confidence that it would repay my study – I had, after all, thoroughly enjoyed his Meltdown – the end of the age of greed (2009) and his earlier Live Working or Die Fighting – how the working class went global in 2007.
This is someone, after all, who has combined an early career as a militant with a later one as both a print and television journalist – reporting on political and industrial struggles against capital…

The early pages of reading (the opening “Neoliberalism is broken” chapter) produced my usual squiggles which indicate appreciation but my attention started to wander in the middle of the subsequent discussion of the Kondtratieff waves - despite the earlier nice little intellectual vignettes of people such as Marx, Rosa Luxembourg, Rudolf Hilferding and Jeno Varga.
So I started to google for the reviews since these give me the questions which ensure that I am reading more closely.
And I came across at least 30 quite long reviews of the book to which I will give links at the end of this post…..

one has to plough through more than 200 pages of analysis in the course of which the author examines one by one the various economic theories advanced by 19th- and 20th-century political philosophers and various IT gurus….At no point on this long road are there any references to the impact of majority affluence on politics in the developed world. Nikolai Kondratieff (inventor of the wave theory of capitalism) occupies almost an entire column in the index. JK Galbraith and Tony Crosland do not merit a single mention….(Crosland actually has one!)
We have to wait until page 263, a chapter headed “Project Zero”, to discover what the author has in store for us.

Methinks that Mullin is a tad too impatient – analysis and diagnosis are important!

The first part of the book ends with a series of annotated graphs which Mason suggests best summarise the massive shifts in debt, performance and inequality which characterise the decades of the last "wave". I really had to concentrate to get the points being made in the graphs

“Prophets of Postcapitalism” introduces the second section of the book (at page 109), paying tribute to the questions posed by the great Peter Drucker (then in his 90s) in his little 1993 book “The Post-Capitalist World” and to others who have understood the significance of the technological and social changes which have been shattering our worlds in recent decades eg Jeremy Rifkin, with his 2014 book The Zero Marginal Cost Society

It is at this stage that I needed one of these maps which identify the link between various intellectual schools – such as this one from the very useful Commons Transition website
In that context, this article from Open Democracy seemed to me to set the Mason book in an appropriate context

For those with more patience, I came across at least 30 quite long reviews – in a few cases of more than 6 pages long…
- Ann Pettifor, for example, prepared a very thoughtful commentary on the book for a discussion she had with the author – suggesting, for example, “we are not the subject of impersonal forces but have human agency” and that capital gains (rather than rate of profit) is the main motive for owners…
- a long and rather pedantic Real-World Economics review focuses on the book’s main thesis about low marginal costs and the new sharing economy
- Prospect gave Mason an interview
- one academic devoted 50 pages to his analysis – in 3 separate The first part here,I can actually understand. The longer parts here and here I have to confess I find largely incomprehensible