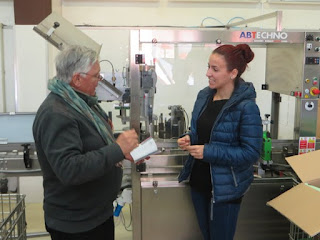 Despite my 7 years’ appreciation of Bulgarian wines, I’ve only once actually visited a Bulgarian winery – and there are apparently 150 of them in this small country according to the latest issue of the small gem which is the Bulgarian wine bible - the Catalogue of Bulgarian Wine (by T Tanovska and K Iontcheva - annual).
I had almost made it to the HQ of one of the Russe vineyards but last week offered an opportunity since I was visiting Pazardzhik on the edge of some of the great wineries around Plovdiv - which stretch up to Sliven and Stara Zagora…I selected three – two in the famous wine village of Brestovitsa (site of my sole effort so far) and one in a neighbouring village of Yustina. The selection was done in consultation with my young wine merchant, Asen, who has a marvellous little shop Vinoorenda at the Russian Monument.

To reach the villages from the main Sofia highway, you take the signpost for Asenovograd at the Plovdiv roundabout and turn right when Brestovitsa is signposted. We were heading first for Villa Vinofera whose Muscat Bianco had caught my fancy – the premises looked interesting but seemed lifeless…eventually a couple responded to the bell but looked bewildered by our request for degustation and purchases…..
The atmosphere in the spa hotel of Todoroff – the village’s most famous winery – was not much more welcoming and we decided to pass the opportunity they gave us for wine tasting (at a price) – as well as what we felt would be an uninspiring lunch. I left Bulgaria’s “village of wine” in some dudgeon…… 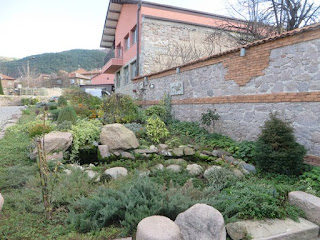 And third time was lucky as we rolled through the gates of Villa Yustina into a spacious cobbled courtyard with two superbly crafted stone building complexes on two sides. One was a beautifully-designed set of open offices – with guest, storage and tasting facilities – and a friendly welcome.
A few minutes later we were being shown with great pride the modern (wine) reception, bottling and dispatching facility. It was my first glimpse of this process and, as the owner branched out in 2006 from his main business of metal containers, it’s clear that he sees this winery’s facilities as a shining marketing tool to demonstrate the superiority of that produce range – let alone the wines themselves……
Our guide did the Bulgarian education system proud…..in her early 20s, Elena had the sort of poise, enthusiasm and humour you need for such a job…Just completing her education at Plovdiv’s Food Technology College, she makes a point of visiting Bulgaria’s various wineries and therefore speaks with an obvious note of confidence when she sings the praises of the Yustina wines – which I got to taste in the coolness of a large, tastefully-designed (excuse the pun) room….I left with a box of its white Cuvee (4 euros)
Apparently the winery also organises "food-matching" evenings.....obviously one stays over for those!! 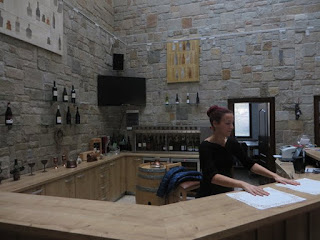 Two stalls left the greatest impression - Villa Yustina (established only in 2006 and located in a village in the Rhodopes foothills near Plovdiv) by virtue of the enthusiastic and helpful approach of their sales guy Vencislav Lyubenov. And the stall of the well known Katarzyna Estate (located on the Greek/Turkish border) - by virtue of it being the only one whose staff (women) were encouraging feedback from their customers.

So, full marks for consistency!
Posted by nomadron at 10:04 AM