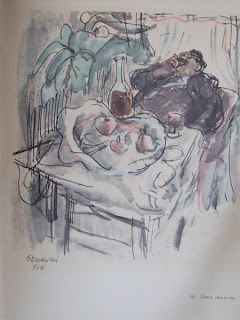 Well I certainly learned a lot more about Bulgarian wines over the weekend – both in the biblical sense (experience) and intellectually. Particularly about the more pricey wines I would never normally buy. You can such great quality here for 2/3 euros a litre that I would never pay more than 8 euros a bottle! I discover (through a great little book "Catalogue of Bulgarian Wines 2013" (available for 15 levs probably at branches of Casavino here) that there are at least 97 independent wineries in this small country – each with several brand names with its own range of wines. And 250 of them were available for tasting over the weekend (as this was the elite, this suggest that there are more than 500 different wines in the country!)

I was more disciplined yesterday, perfecting the swill and spit – and, even then, physically not able to taste too many reds because of the semi-revulsion my body has developed to them. One exception was a fascinating anti-oxidant red wine – Alfa Vita – which adds a strong medical tone to its marketing. It certainly was smooth and tasty. The CEO I spoke to (also the driving force behind the local Academy for Wine) was kind enough to give me a bottle in exchange for a copy of my booklet on Bulgarian realist painters! And advised me to drink 50 ml or so for breakfast!! At 5 euros a bottle, it’s just what the doctor ordered!
One of my goals yesterday was to savour the Roses on offer – I have never been a great fan of these but, as my taste for reds has declined, so the few Roses I have come across have become more interesting. And there is a great choice here!
Two stalls left the greatest impression - Villa Yustina (established only in 2006 and located in a village in the Rhodopes foothills near Plovdiv) by virtue of the enthusiastic and helpful approach of their sales guy Vencislav Lyubenov. And the stall of the well known Katarzyna Estate (located on the Greek/Turkish border) - by virtue of it being the only one whose staff (women) were encouraging feedback from their customers.
The wine fair was so popular the second day that it was almost impossible to move from stall to stall!
As each visitor left, they were presented with free copies of the (massive glossy) DiVine magazine which sponsored the fair. Intriguingly the cover picture is of champagne bottles in a picture frame – is this a case of the wineries bidding to be included in the European Capital of Culture?

There is a serious argument to be made for eating and wine drinking as a serious cultural pursuit – perhaps the Divine magazine should consider having a few pages on Bulgarian painting (and other cultural material) in each of its future issues?  Interestingly there was a good place on Kurnigradska St (almost at the corner with Vitosha) which offered a heady mix of paintings, wines, books and musical performance. It is now not more - not at least at that address - although a new little gallery has opened in Tsar Samuil St (off Solunska) which mixes wines and aquarelles!!
The aquarelle is - of course - an......Ilyia Beshkov - from the superb 1950s book I bought from Alexander....
Posted by nomadron at 9:40 AM