The 1944 communist takeover of Bulgaria 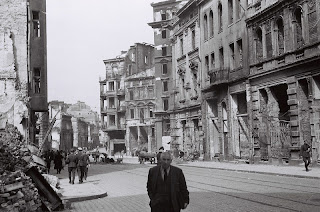 It was a throwaway phrase in the introduction to the superb Alexander Bozhinov book which I picked up earlier in the week which alerted me “Stoyan Venev pled for him before the People’s Court”. So even this Bulgarian trailblazer of satire (67 years of age when the communists swept into power in September 1944) was caught in the net of deranged and murderous suspicion (by virtue apparently of his foreign travels and bourgeois life-style) and condemned to a year in prison. He was lucky – compared to the fate of thousands of his compatriots!
As I was compiling my little book on Bulgarian Realist painters of the 20th Century I had noticed that many had had to emigrate in the immediate aftermath of the communist takeover – whether from painting (into cinema or theatre design) or from the country altogether. And that some who remained in the country (like Nikola Boiadjiev and Boris Denev) were totally banned from any artistic endeavour. But I had not understood just how savage the communist takeover in Bulgaria was in 1944 – by far and away the worst in the Soviet bloc.
Forgive the length of this post - but we owe it to those killed in such circumstances to remember them - particularly when the nature of their demise is known by so few outside the country. A recent issue of the Vagabond journal has the clearest statement

The killings of opponents of the Soviet system started as early as 9 September 1944, the very day the Communists seized power in Bulgaria.
Nobody knows how many Bulgarians lost their lives in the first weeks of the "people's democracy," their only crime being their political opinion or their social position. However, the number of victims of the so-called People's Court, which was created to give legitimacy to the murder of politicians, artists, writers and even physicians considered "dangerous" to the new regime, is well documented. From December 1944 to April 1945 the court issued 9,550 verdicts, with 2,680 death sentences and 1,921 life terms. To understand why the Bulgarian Communists were a lot more cruel than anyone else in Europe at the time one needs to go no further than the numbers: the Nuremberg Trials against top Nazis issued just 17 death sentences.
If you are looking for a single day when the Bulgarian political class was decimated with one blow, you get 1 February 1945. On that day the People's Court sentenced to death 67 MPs and 22 ministers who had held office between 1940 and 1944, including the former prime ministers Dobri Bozhilov and Ivan Bagryanov. Also killed were the regents Prince Kiril, Bogdan Filov and General Nikola Mihov, nine secretaries to the palace, publishers and journalists of national newspapers, and 47 generals and senior military. They were shot dead on the same day, beside an unused pit left on the outskirts of the Sofia Central Cemetery after the Allied air-strikes in the winter of 1943-1944, and were buried on the spot. The mass grave was left unmarked and several years later was turned into an ordinary burial ground. In 1995, in lot 124 of the cemetery, a monument to the victims of 1 February 1945 was finally erected. The following year the Supreme Court posthumously repealed the death sentences.
The victims of the People's Court are just a fraction of the number of Bulgarians who suffered various forms of repression during Communism. Between 1944 and 1989 thousands of opponents of the regime were detained, interned or denied education or work advancement. The reasons for the repression were many and varied: accusations ‒ usually bogus ‒ of espionage and plotting against the Communist state, or opposing the forced collectivisation of agricultural land, or disagreeing with the Bulgarianisation policies toward the country's Muslims. Telling political jokes, wearing mini-skirts, having a "bourgeois" past or the "wrong" relatives could all land you in a labour camp. So could listening to Elvis Presley music. The total number of those repressed between 1944 and 1990 is estimated at about 300,000.

The date of the communist coup – 9 September 1944 – was a signal for revenge and the start of blood-drenched Bacchanalia on the territory of the entire country. The victims of the class wrath were not only politicians, businessmen, lawyers, civil servants, police and army officers. The self-proclaimed “people’s revengers” attacked the Bulgarian intellectuals with the same zealousness: teachers, priests, journalists, writers, editors, artists, professors, lecturers and all kinds of people of the pen, of culture and of the spirit perished without trial or sentence in the cities, little towns and villages. It would be logical to ask ourselves why was the country’s cultural elite branded and persecuted as the most dangerous “enemy of the people”?

The indictment produced by the Sixth Panel of the so-called “People’s Tribunal” attached the following qualifications to the cultural elite: “career-seeking intelligentsia that had lost its touch with the people”, “public evil that needs to be cut out so that it would not contaminate the public organism”, “mercenaries of the pen and of speech”, “instigators and collaborationists” of the persons responsible for the national catastrophe, etc. The answer is very well known: propped on the bayonets of the occupiers, the communist upper crust followed the example of the Bolshevik revolution of 1917-1921. Without choosing its means, it showed determination to deprive the nation of the voice of free speech, and – as it proclaimed itself – “to cut the democratic values from the public organism”, to obliterate the notions of democracy, freedom and fatherland from public space, the carrier of these notions being the patriotic intelligentsia.

Bulgaria had apparently about 100 concentration camps in the post-war period to deal with its various “dissidents” – in most cases those whose dress or joke sense was not acceptable.
Voices from the Gulag – life and death in communist Bulgaria(1999) looks in harrowing detail at this.