Salute to the local municipal galleries 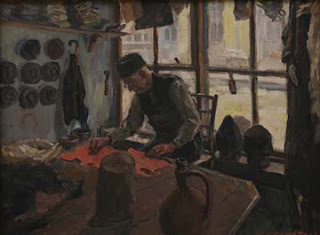 Thursday I spent on a very pleasant drive from Velingrad in the Rhodope mountains to Bucharest (500 kms) – first through the gorge I spoke about; then east across the Thracian plain with a spectacular glowering sky; a hop past Stara Zagora over another mountain; and pulled in at Kazanluk on the basis of what I had read about its Art Gallery. And I was not disappointed. I was warmly received by Daniela who introduced me to their collection which included the Stanio Stamatov featured above – he was one of many local painters. Indeed the small town was so prolific with artists that it used to be called „the town of a hundred painters”. The collection is therefore a rich one - of both paintings and sculptures - and, amongst those whose acquaintance I made were Vasil Barakov (1902-1991); a scupltor Hristo Pessev (1923-2000); and Spas Zawgrov (1908-1991) born in a nearby village whose landscapes and portrait sketches were in a temporary exhibition funded by his family. Hristo Genev, the Director, welcomed me into his den and presented me with a couple of discs (one of his own material). He sculpts the most fascinating pieces from wood – one of which I displayed a couple of posts back. This is a gallery worth a detour to see – and many revisits!

I don’t often look at yahoo stories - but this is a useful bit of pleading for the simpler life we should be leading.

There are definite advantages in attending workshops which are in languages one doesn't understand! It forces you to use other senses to understand what is going on - to look at body language, for example. And it also gives me the time to reflect - eg I suddenly remembered the paper I had written in 2008 about Training assessment Tools which have different examples which could be used at the different stages of the training cycle. I duly had it printed it out and gave it to the Council of Ministers rep who was also attending the Vilengrad session (since they had insisted on a simplistic evaluation form being used). I will add this shortly to my website.
And I was also able to read more closely the paper on Training and Beyond; seeking better practices for capacity development by Jenny Pearson which I referred to recently - which sets out very well the critique of training I was myself struggling toward in my own 2008 paper.

Finally three good articles on the Chinese mood. The first about a rare critical article on Mao by an 82 year old Chinese economist. Then a good piece on the competition for the new leadership positions.
The last is particuarly interesting - since it gives an insight into how systematic is the Chinese way of researching issues.
Posted by nomadron at 8:09 AM