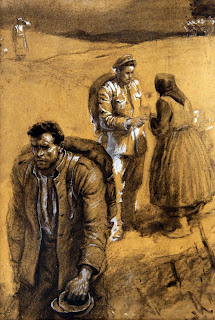 The Hungarian Spectrum blog continues its amazingly penetrating analysis of political developments in Hungary by a piece on the background to an event which I (and, I supsect, all non-Hungarians) had missed in all the comment about the recent Constitutional changes there – the renaming of the country from „Hungarian Republic” to „Hungary”.
From such promising beginnings in 1989, this small country is turning out to be a real pain in the arse. I was struck with the arrogance of its people in 1993-95 when I worked there – and, looking at the size of their houses (and this was in North-East Hungary, their poorest part hard up against the Slovak, Ukrainian and Romanian borders), I wondered why on earth they needed European money then. Even then, all sorts of municipal developments were in evidence – something which you don’t even see here in the capital of Bulgaria 15 years later!
I have never seen such a poor state of pavements as here in Sofia. I wonder what the statistics of broken ankles are here. Unfortunately the internet offers no real treatment of Bulgaria – there was a rather inconsequential piece recently on an Economist blog about the corrupt state of the media here but, as one of the discussants rightly said, they have been set a very good example by the anglo-saxon world!
I have always seen Sofia as have an old-fashioned gentility – mainly from the tiny shop and gallery units you fiind in its centre with both young and old eking out a fragile existence but at least one whose rhythm they control. Since hearing the buskers in the nearby park playing early 1960s jazz and rock, I realise that Sofia, in many ways, could market itself as the retro-capital of Europe. You still see Trabis (although generally vegetating on the sidewalks); and, at leats round my area, the old folk are always out in strength and not marginalised as in so many other capitals. Of course, this is a stark reflection of the poverty of the economy – indeed I just don’t know how the economy here manages even to tick over.
Romania has at least one good news outlet in English which I came across recently

Apparently today is both St George's Day AND the Day of the Bulgarian Army. So I'm using one of Ilia Petrov's pictures.
Posted by nomadron at 1:49 PM