In praise of Sofia 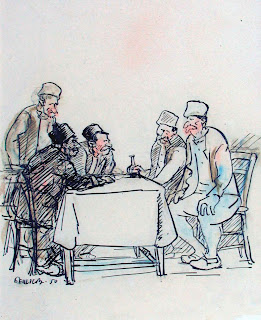 One of my readers was shocked that I was contemplating „leaving Romania” – if only for an 18 month project in Serbia or Bulgaria. As long as I have my house in that beautiful stretch of the Carpathians, it will be difficult to leave the country – although it does stretch my patience a lot. And work in neighbouring countries (Turkey is also still a desirable possibility – although not technically a neighbour) is not inconsistent with continued access to Romania. But Sofia and Brussels are, for me, the ideal cities – and Sofia has a special charm.. Yesterday was an example. I decided to head out and buy the large book on the graphic artist I had discovered by accident – Boris Angeloushev (1902-1966). I learn that his evocation of the black and white graphics of the early 20th century German artist Kathe Kollwitz arises from the fact that he was trained in Berlin Art Academy in the early 1920 at precisely the period she was most active in the struggle for socialism there. Since I first discovered her in Berlin in the 1980s I have been a great fan – and recall also the serendipidy of my encounter with the marvellous 80 year-old Tina von Schullenberg in Duisberg (I think) who was being honoured at a special exhibition of her graphics – which included the skecthes she had done in the 1930s of Nottingham miners. She was gracious enough to gift me with a set to give to the Scottish mining community and also a couple of books (with sketches) she wrote about her time with the Nottingham miners and about her life. And what a life! She was the brother of one of the Generals who took part in the failed July 1944 assassination attempt on Hitler.
At a tram stop I come across another of these open stalls and pick up a collection of reproductions of Russian painters - not far away I pick up 5 great Fondazione Amadeus CDs of baroque music - for less than a euro each. No questions!!
Then a meeting with Blago, my young landlord, who is about to acquire a flat he thinks will interest me for my idea of a base here for the next 12 months (if the Serbia project does not come off) – and he is right. The ground floor of a delightful old house within minutes of Vitosha street and all my galleries. The timing fits – since it will be the end of the month before all the paperwork and slight adjustments are needed and that is the point at which I expect to hear the results of the Serbia project. I also look at a flat he will have for sale nearby which is in its original state and which they will restructure togive a living room of 50 sq metres. It would be a good investement. Then off to see what the guy who sold me sketches (on an old magazine and scraps of paper) purporting to be from the pen of the great Ilia Beshkov has to offer. Beshkov (see example above) worked in the first half of the 20th Century. My bearded gallerist/artist Alexander Aleandriev (at Tsar Assen 38) has a tiny space in which there is room for a chair in which you sit while he pulls things (like rabbits out of a hat) that might interest you from plastic bags and piles of papers, magazines, drawings, aquarelles and oils (some his). This time he had prepared for me a superb large 1958 book with Beshkov sketches and cartoons on glorious paper and a 1965 autobiography full also of the sketches. I snapped them up – along with a 1907 catalogue of another cartoonist I had not heard of – Alexander Boshinov - and got a 1941 newspaper with a couple of Beshkov sketches thrown in as a bonus. "Super dumping prices" he says in his only English! We communicate in Russian - and he is indeed a veritable Russian figure with his beard, flow of words and bohemian work environment.
Then off for my appointment with another gallerist – who is also sitting amidst huge piles of unframed paintings some of which he had prepared for me. I sift through a couple of hundred – and emerge with seven paintings (including a Mateev and a dramatic painting by one Ivan Getsov (1910-1991)of a scene from the war of independence) for just over 1,000 euros in total.
I just have time to take them home and change – and it’s off to a very pleasant dinner with Sylvie and Vlad, from whom I rented my flat in Sofia 3 years ago. A simple salad with a very quaffable Pomorie raki starts the meal in her beautifully spacious flat; followed by a superb delicacy she calls Tsarograd aubergine which has pieces of garlic, Bulgarian white cheese and herbs on a grilled opened-out aubergine base. Tsarograd is - as I learned from the early Mario Zhekov paintings - the old name for Istanbul. Vlad is heading out for a night on the tiles - so I get his garlic aubergine too! The piece-de-resistance is, however, the neck pork stuffed/marinated with three types of cheese!! I want a second helping but know when to call time! Thank you Sylvie!

The point of this long diary entry is simply to say that I don’t have such an active social life in other places. That’s why Sofia scores.
Posted by nomadron at 9:54 AM