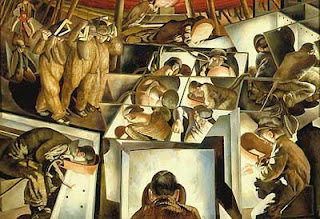 If I’m so unhappy with the EC’s approach to institution building in kleptocratic countries, how would I improve it?"
The first steps in any such change are, of course, to assess the situation – describe how the systems works and assess how well it works – and then find out what the various stakeholders think.

The 2007 European Court of Auditors' assessment of the EC Technical Cooperation programme was a good start. It spurred the Commission to produce its "Backbone strategy" which my present draft to the NISPAcee Conference in Varna currently assesses here .

Given the bureaucratic constraints on policy change (particularly given the upheavals involved in creating the External Service), it is hardly surprising that the Backbone strategy says that the strategy is OK and that it is the staff of the 81 EC Delegations which manage it who need to wise up.

These staff are well trained in procurement issues - but not so knowledgable about the substance of the sectoral work they manage; nor particularly skilled in contractual management. The EC has been publishing Manuals and Guidelines for its Delegation staff in recent years to help them understand the conceptual issues involved in institution building - see this one on capacity development in 2009.

Easier said than done? And still they hardly mention the people who actually do the work - the independent consultants like myself. Strange!

For more on the Court of Auditors' Report - and the EC response, see tomorrow's post


My recent visit to Sofia set off a paean of praise to that city which should be extended to the whole country – at least as far as its landscapes and townscapes are concerned. And, compared to Romania, it is possible to travel around the country and taste this varied scenery in superb ethnic houses remarkably cheaply. In 2007 I discovered by accident a small book on these places produced by the Bulgarian Association for Alternative Tourism – and was very pleased to come across the 2010 version on my last trip.

The Guardian has a good story about some fundamental changes the Conservatives want to make to public services in Britain which were never mentioned in the manifesto. Democracy is in shambles in that country. The previous government commissioned a paper on this issue to a fairly right-wing body which failed to produce convincing evidence of the benefits of further contracting out of public services. See also here an article about the likely effect on the health service.

The painting is Stanley Spencer's wartime "Welders"
Posted by nomadron at 10:42 AM

Email ThisBlogThis!Share to TwitterShare to FacebookShare to Pinterest
Labels: the EC backbone strategy