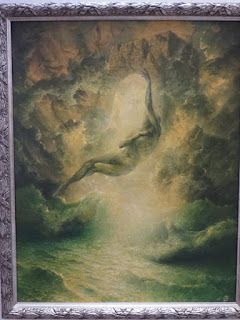 A lot of claims have been made in recent weeks for writers who anticipated Trump’s rise to power. First it was Richard Rorty – in a long-forgotten book published in 1998. Then the son of Neil Postman, who had written in 1985 a powerful critique of the effect of modern television - Amusing Ourselves to Death – popped up to claim that his dad had seen it all coming. The son’s article referred us back to Brave New World – issued in 1935….

The conventional wisdom of our era insists that modern industrial society can’t possibly undergo the same life cycle of rise and fall as every other civilization in history; no, no, there’s got to be some unique future awaiting us—uniquely splendid or uniquely horrible, it doesn’t even seem to matter that much, so long as it’s unique.

The theory, first proposed in the early 18th century by the Italian historian Giambattista Vico and later refined and developed by such scholars as Oswald Spengler and Arnold Toynbee, that civilizations rise and fall in a predictable life cycle, regardless of scale or technological level. That theory’s not just a vague generalization, either; each of the major writers on the subject set out specific stages that appear in order, showed that these have occurred in all past civilizations, and made detailed, falsifiable predictions about how those stages can be expected to occur in our civilization.

Have those panned out? So far, a good deal more often than not. In the final chapters of his second volume, for example, Spengler noted that civilizations in the stage ours was about to reach always end up racked by conflicts that pit established hierarchies against upstart demagogues who rally the disaffected and transform them into a power base. Looking at the trends visible in his own time, he sketched out the most likely form those conflicts would take in the Winter phase of our civilization…..

Those left out in the cold by these transformations, in turn, end up backing what Spengler called Caesarism—the rise of charismatic demagogues who challenge and eventually overturn the corporate-bureaucratic order.These demagogues needn’t come from within the excluded classes, by the way. Julius Caesar, the obvious example, came from an old upper-class Roman family and parlayed his family connections into a successful political career.

Watchers of the current political scene may be interested to know that Caesar during his lifetime wasn’t the imposing figure he became in retrospect; he had a high shrill voice, his morals were remarkably flexible even by Roman standards—the scurrilous gossip of his time called him “every man’s wife and every woman’s husband”—and he spent much of his career piling up huge debts and then wriggling out from under them. Yet he became the political standardbearer for the plebeian classes, and his assassination by a conspiracy of rich Senators launched the era of civil wars that ended the rule of the old elite once and for all.

Thus those people watching the political scene last year who knew their way around Spengler, and noticed that a rich guy had suddenly broken with the corporate-bureaucratic consensus and called for changes that would benefit the excluded classes at the expense of the affluent, wouldn’t have had to wonder what was happening, or what the likely outcome would be.

It was those who insisted on linear models of history—for example, the claim that the recent ascendancy of modern liberalism counted as the onward march of progress, and therefore was by definition irreversible—who found themselves flailing wildly as history took a turn they considered unthinkable…… And, as Spengler sketches out the process, it also represents the exhaustion of ideology and its replacement by personality.

….. knew that men are generally disdainful of experience and that, driven by limitless and uncontrolled hope, they like to conceptualize the future in terms of what they consider the desirable rather than the likely course of events.
In counterpoint to these, in his view, irrational trends, he remarked that optimism is naive and in some respects even vulgar, and that it surely stands for cowardice when one is afraid to face the fact that life is fleeting and transient in all its aspects.

The painting is one of my favourite Bulgarian artists - Tony Todoroff
Posted by nomadron at 2:21 PM