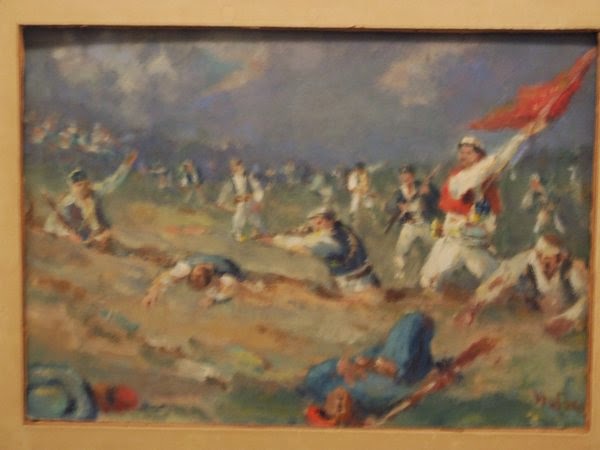 Can a Greek historian (even if one who now teaches at an American University) cast aside his preconceptions and offer the English-speaking reader an understanding of “the Balkan Wars”? This is the question I have after reading Andre Gerolymatos’ The Balkan Wars: Conquest, Revolution and Retribution from the Ottoman Era to the Twentieth Century and Beyond

It was one of two books I bought recently to help me throw some light on the two 1912-13 Balkan conflicts in which first Bulgaria, Greece and Serbia united to fight (successfully) the Ottomans and then divided to fight one another. I quickly discovered that the book is mistitled and that the Balkan wars to which the title referred are in fact the various struggles (not least between brigands) and bloodletting which have characterised the area for centuries. It is none the worse for that wider focus. The second book – by a Serb – has the narrower focus.
As one review puts it

this book is a work of cultural sociology in seeking to uncover the patterns of history that have led to constant conflict, the choices that led to cycles of endless acts of retribution, the cultural scripts of martyrdom, betrayal, and defeat that have led to the nursing of grudges. There are a lot of people who come off looking very poor in this book, whether it is exploitative Phanariot Greeks in areas like Moldova and Rumania; the Ottoman sultans (even when in reform mood); or the brigands whose oppressive and exploitative ways was a result of and contributed to chaos and anarchy throughout the Balkans. But towering above all this is the two-faced nature of the interest of the “Great Powers” in the region

We know little of these wars in the West – coverage of the ethnic cleansing of the 90s focused on older struggles, not on the events of 100 years ago. And there were very few commemorations in 2012 and 2013 – particularly in Bulgaria which risked (and lost) everything by its wanton attack after the cease-fire on its previous ally Serbia in order to try to win the disputed lands of neighbouring Macedonia. Illusions of a lost grandeur! Of course, with my interest in Bulgarian painting of that period, I come across frequent references to the time many of my favourite artists spent as war artists in this period….
Posted by nomadron at 8:43 PM