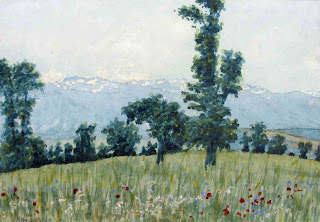 I am puzzling over the lack of interest British writers (of any sort) seem to have shown in Bulgaria and the larger interest British writers have taken over the ages in Romania, whether from novelists such as Bram Stoker and Olivia Manning; travellers such as Sir Sach Sitwell, Patrick Leigh-Fermor, Devla Murphy and William Blacker; or historians such as Robert Seton-Watson, Dennis Deletant , Keith Hitchins and Tom Gallagher (both of whom I referred to yesterday)

Romania has had a much larger and more industrial population than Bulgaria- with a highly educated and articulate intelligentsia (with strong French connections) making its mark in the inter-war period in various cultural fields. Unlike Bulgaria, it had been ruled with a light touch from Constantinople. Bulgaria’s experience of the Ottoman Empire and Turks was much harsher and its celebration of independence deeper and more lasting than Romania’s – which has had long reason to be sceptical of its governors, no matter how Romanian.

Bulgaria has seemed for the past century sleepily rural and romantic as caught in a marvellous book published in 1931 by the Balkans' correspondent for the Chrstian Science Monitor RK Markham. His Meet Bulgaria has delighful photos and can be read in its entirety in the link. And the country looked more to Russia for support – even before 1945 – although many of its painters spent formative time in France, Munich and Italy.
A Concise History of Bulgaria is the only history book I can find (although Wikipedia has a long and useful note on the various phases of its history) – and it’s significant that the Lonely Planet website could list in 2010 as books worth reading only the 1912 novel Under the Yoke; other novels on the same theme of war with the Turks and books about gypsies!
The best Guides for me are The Rough Guide to Bulgaria which does contain at page 461-64 of the link a list of English books on Bulgaria (many out of print) as well as a useful section on the country’s music; I also highly recommend a locally-produced Bulgaria Tour Guide  (Tangra 2006). A heavy, glossy 670 pager with superb small illustrations – for only 15 euros. And also this delightful little book which features some of the amazing small bed and breakfasts in the countryside you can stay at for a song.
And the only decent blog I can find in English from or about the country is a young American teacher's who, in a straightforward and charming way, describes her experiences (with Sofia mainly), including a variety of photographs which indeed give a good sense of the place. It was her blog which alerted me to the reopening of the National Gallery. And her kind response to this blog has given me access to her own list of books about Bulgaria worth reading. Many thanks!

Both countries have superb landscapes – and they are both proud peoples. Somehow, the Bulgarian pride is simpler. Since Winston Churchill’s put-down in the late 1940s of the Leader of the Labour Party – “a modest man – he has a lot to be modest about”, I hesitate to use that adjective. But that is part of the attraction of the Bulgarians – they are not pretentious and have not spoiled their country. My tour last year of the regional municipal galleries (notes at the back of my booklet on Bulgarian realist painters) showed me positive officials of a sort I rarely encounter in Romania. Their small country has so many more interesting places to visit throughout the country – from historic sites and buildings to sea and ski resorts – and the style and service you get is impressive. Their lack of Romania’s elitist intellectual tradition is, I think, their saving grace.

The aquarelle is by a not very well known Bulgarian - C Ionchev
Posted by nomadron at 9:05 AM