A year ago I announced that I was trying to draft a booklet on realist Bulgarian art to encourage visitors to visit the great galleries here - and gave a link on my website to the concept as it then stood. Thanks to the recent regional tour and a kind offer of assistance from the Curator of the Dobrich Gallery, I have been working on the draft again – and have just uploaded a new version to the website. This one gives a small amount of info on about 150 painters who have taken my fancy.And yesterday I found another charming little private gallery (Loran) exhibiting works from the mid century.

The caricaturists
The Bulgarian tradition of caricaturists is a very strong one – starting (I think) with Alexander Bozhinov a hundred years ago and including people such as Ilyia Beshkov, Marco Behar and Boris Angeloushev. One of them, indeed, Rayko Aleksiev so annoyed the communists that he was arrested on their coming to power and died in prison under suspicious circumstances. A Gallery is named after him.
One of my prize possessions is a copy of a 1954 magazine called New Bulgaria with each of its 18 pages covered with 3-4 amazing pencil caricatures almost certainly doodled by Bulgaria’ most loved graphic artists – Ilyia Beshkov. I was happy to pay 250 euros for it – after all I got 50 sketches for about the same price as the going rate for one (admittedly larger) caricature of his!
And in one of Sofia’s many street stalls, I bought last week two 1962 issues of an art magazine Izkustvo – one of which had excellent Beshkov reproductions – to add to the rather worn 1941 issue I have of another cultural newspaper Shturschel (?) which has a Beshkov reproduction on its front page. 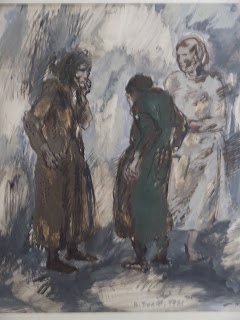 Cultural Tourism
This got me surfing the net to try to find some information about these art journals of the early and mid part of the century. I drew a blank but did come across some interesting material on the Bulgarian cultural heritage - not least some grim experiences one young painter had during the the Communist period. How artists coped during communist repression is a fascinating subject - some (like Boris Denev and Nikolai Boiadjiev refused to toe the official line on painting and almost stopped painting); many other moved into theatre design and cinema). Things had eased by the 1980s largely due to the influence of PM Zhivkov's daughter who was a great art afficiando!
I unearthed an interesting paper on how the communist heritage could be used as part of a cultural tourist strategy (which missed this human dimension) and another paper (by the same Dobrich author) on how Bulgaria might develop a strategy for cultural tourism.
Also an interesting example of how some of the treasures here are ignored even by the locals.

The gouache above may look a little like a Beshkov - but is actually one of the V Vulev's I bought a few days ago in Vihra's Gallery
Posted by nomadron at 10:44 AM