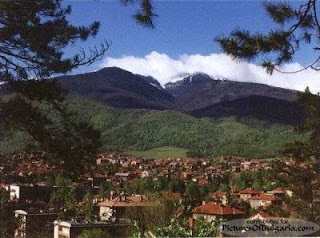 Up and away early to avoid the midday heat which once (actually three times) disabled the car a few years back in this part of the world at this time of the year as were driving back from the lovely Thassos island. Just outside Drama in Greece - as were were beginning the ascent for the new border crossing there – the car engine just stoppped. We were kindly treated (with an overnight stay needed for a petrol filter to be replaced) before the same happened at Plovdiv - after much meandering through gorges and round the densely wooded edges of the Rhodopes (with many minarets in the villages). After a mechanic asked for 300 euros with no guarantees, we discovered the car was working again and decided to proceed – over the Balkans. A Romanian lorry driver confirmed that it was the heat – it had happened to him. Just as we reached the top of the mountain ridge, the car stopped again – but, by then, I knew the trick – just to wait ten minutes or so.
Anyway I neednt have worried today – since, apart from my climb over the Petrohan Pass starting before 09.00, the road is heavily wooded and therefore protected from the heat. But the surface is bad (particularly on the descent) and the road twisty – so a 100 kilometres journey from Sofia to Varshets actually took 3 hours (including a trip to Pennywise in the nearby village of Berkovitsa for a bottle of Mezzek Sauvignon/Pinot Gris . I’m in the heart of Vrachanski Balkan Nature Park here – with towering mountain ranges on 2 sides. The hotel is very nicely situated - with solar panels covering the entire roof (very rare!). I was able to check in (to a large room), get organised and have a swim all before midday.

After my last post, I got thinking about Path dependency – and discovered that the phrase originated in economic not sociological studies as I had imagined. And, of course, it takes us deep into fundamental issues which thinkers have argued about for millenia - such as free-will! The opening pages of this paper are quite enlightening about this – but thereafter the paper gets typically turgid.
Posted by nomadron at 12:48 PM