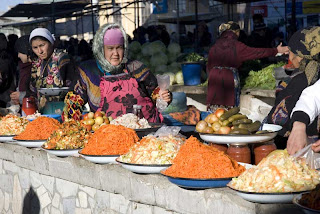 Vegetable markets are always good at this time of year – but Bulgarian and Romanian ones particularly so with the richness of their produce shown at best in the sunny, blue skies. I’m just back from a trip to the new Obor market which lays the products out according to their county (Judet) of origin. The cauliflowers were particularly superb – and even brocoli so cheap. Bucharest markets, of course, are no match for the Tashkent ones – with their prestigious rows of nuts and spices - let alone the pickled delicacies offered by the Korean women whose families were stranded there (and in Kyrgyzstan) decades ago by Stalin. And it is Bulgarian vegetables which are, rightly, famed here for their superiority (with the plain between Georgiu and Bucharest being populated by Bulgarian vegetable growers). The year I spent in Sofia I lost all my bad cholestorol thanks to the vegetable regime I had – if it was too early for their superb large tomatoes (threatened, I’m told, by EU regulations) and leeks, then Turkish and Greek vegetables rolled up easily from over the borders).
Sofia, in my view, should be one of the pin-ups of the slow food movement. The modest grid-iron system which is its centre developed after the 2nd WW bombing; has kept cars in their place; and created small spaces which old and young alike have been able to use to pursue their dreams – whether shops where they sell the clothes they design themselves, micro art galleries, tobacco, wine cellars . Only in Sofia and Tashkent could I boast my own wine merchant – in Sofia a tiny step-down cellar on Bvd Stambouslska which had a few barrels and cases of select wine at such reasonable prices (in Tashkent a medical doctor who was experimenting in Pashkent – an hour’s drive from Tashkent – with mountain herbs and wines and brought bottles of the latter to me weekly to taste). Perhaps, however, I have now at last found one here in Romania. Although the area around the Bucuresti Gara de Nord has various wine shops with wine from the barrel, none compares with the small wine cellar I found recently in Rasnov (between Brasov and Fundata). They offer wines from my favourite area – Dealul Mare – just north of Ploiesti – and the dry whites and reds are quite spectacular at less than 2 euros a litre)
The open market in central Sofia (down from the mosque and synagogue) is in a really down-at-heel area which I feel will soon spring up again like the some of the old Viennese market squares I saw 20 years ago. Unlike Bucharest, it has quite a few Arab shops where incredible ingredients can be bought. One of the other (many) delights of Sofia are the serious coffee-drinking cafes (particularly the smoking one behind the National Art Gallery) – or of the sight of people carrying their coffee in the street. I have never been a smoker – but I feel that the anti-smoking drive has gone too far!
One final comment about vegetables. I remember very vividly from my childhood my mother’s jam-making. It is something which I therefore respect – and which I am so pleased to see continued here in Romania. At this time of the year it is something which Daniela (who normally leaves the cooking to me) spends time on. As she says, it is one of the ways her parents kept the family alive in winter. It reminds me of one of the jokes I read in the Ben Lewis book on Hammer and Tickle I am now reading – “why was Ceaucescu particularly keen on the first May celebrations?” Because he wanted to see how many Romanians had survived the winter!
And, while we're on the subject of agriculture, here is an excellent post
Posted by nomadron at 2:45 PM

Email ThisBlogThis!Share to TwitterShare to FacebookShare to Pinterest
Labels: Sofia