This is not a blog which expresses instant opinions on current events. It rather uses incidents, books (old and new), links and papers as jumping-off points for some reflections about our social endeavours.
So old posts are as good as new! And lots of useful links!

High Drama in the Commons 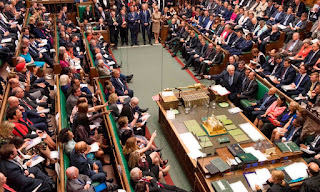 Quite remarkable scenes in the House of Commons as the government's suspension of Parliament is subjected to challenge. There's still another hour or so before the parliamentarians are unceremoniously booted out of Westminster by the Government - and the country loses its democracy for the next 5 weeks.....
The session started with the high-profile Speaker of the House of Commons - John Bercow - announcing, to everyone's amazement, that he will stand down at the end of next month – regardless of what happens with any “vote of confidence” in the Government later this evening.

If ever there was one person who epitomised the modern UK drama it has been Bercow, nominally a Conservative MP…..With political, personal and even marital issues, he has embodied the human side of an institution which had almost lost public trust. He has taken the side of ordinary MPs and of those who wanted to challenge the traditional ways of doing things in this most English of institutions…..Above all he has opened up the House in an amazing variety of ways - in matters of recruitment and access.

He has shown the difference a single person can make in life........ If Brexit has been about anything, it has been about parliamentary sovereignty - and he has struggled manfully to assert that principle

Readers know that I never comment on “breaking News” but, for once, I feel this warrants breaking that rule…..of course, a part of me suspects it is part of the the “Great Game” which the English find so entertaining
The tributes to Bercow were very moving and almost brought tears to my eyes. Very noticeable was the emptiness on the Government benches (about 20 as far as I could see compared with the hundreds on the Opposition benches!!).

And the government continued, throughout the two subsequent debates, to treat the House with contempt - bringing only a couple of Ministers in at the last moment to answer the various points made......
Posted by nomadron at 6:01 PM

Dispatches to the next generation (2019) - one man's humble attempt to make sense of the world (with great hyperlinks!)